On Tuesday AS Roma has confirmed that they have completed the signing of France international Steven Nzonzi from Sevilla. He has penned a four-year deal with the Serie A side. Per the club’s official website the French international has cost an initial 26 million Euros. 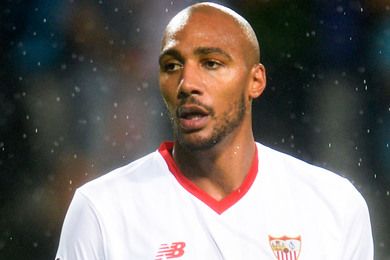 At Roma, he will be wearing Nb. 42 jersey. He hopes to improve during his time with the Serie A club. He said clearly that he is very happy to be in this club, and to be the new Roma player.

He also added: “I always want to improve—regardless of age, the most important thing is to give your best and work hard. I want to do that, to become a better player and help the team with my play and experience.”

After spending three years in La Liga with Sevilla, he gained a lot of experience by winning the UEFA Europa League during his time in Spain. The 29-year old also played a part in France’s World Cup win and came on as a substitute in the final against Croatia.

Nzonzi is a commanding presence in the midfield, excellent at winning back possession, composed on the ball and he is strong aerially. Roma squad had lost Radja Nainggolan to Inter Milan this summer, so Nzonzi will add strength to Roma’s team for sure.

The Giallorossi will be looking to build on a strong season last time out. They have finished third in the league and have reached the semi-finals of the Champions League. Even though they lost the goalkeeper Alisson Becker and Nainggolan the club has moved to strengthen the squad. Ante Coric, Bryan Cristante, and Justin Kluivert offer plenty of promise play on the field, while Robin Olsen will take Alisson’s place in goal.

The Italians have also added important experience with Javier Pastore, Davide Santon and now Nzonzi coming in. We can definitely comment that this has been a busy summer in the transfer market for Roma. Even though they don’t have enough challenge for the title it will be definitely interesting to see how they deal with so many new players have arrived in the club.