After scoring the first goal at a soccer match, it is easier to predict the final outcome of the match. This is due to the fact that soccer is a game in which not a lot goals a scored per match. Therefore, the first goal should not be considered as invaluable. But, how can bettors use this information to place valuable bets? 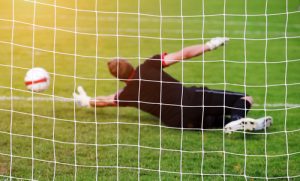 In order to bet accordingly, bettors are always able to use historic data in order to predict how likely it is for a team to win a match. Naturally, the most important event in soccer is a goal and in live soccer betting, bettors are able to place money on events they already have background knowledge about and the first goal therefore is of utmost importance for this prediction.

Understanding the bet odds and knowing how to bet is the primary skill every bettor should posses. Once these skills are acquired, bettors may move towards learning how to bet on Over/Under and use a Handicap soccer betting strategy.

Does the first goal as a rule lead to a win?

Not all the teams are equal, but if we look at the last seven seasons from the Premier League, we can see that in 69 % of the matches, the team that scored the first goal also won the match. In 19 % the match ended up in a draw and in 12 % of the games, the team managed to win although was not the first one to score.

These stats can be seen in the table below:

The table shows that if a team from the top four gives the first goal soccer, that team will win the matches in 4 out of 5 occasions. On the contrary, a team from the bottom four will have very bad chances of winning.

How important is the team ability in regard of chances for a comeback?

If we break down the total percentages of wins, draws or losses we can see that they are completely flipped when a team concedes first:

Proportion of Premier League gamew won, drawn or lost when conceding first by strength of team. 2009/10 to 2015/16

According to the table, one team which is among the top four teams will lose in only 6.1 % of the games in which they gave the first goal. On the contrary, a team from the bottom four teams will only win in 6.4 % of the matches in which it leads with the opening first goal. Having all this information in mind, bettors may make reliable predictions about the outcomes of the match based on the first opening goal.

Various odds and probabilities after the first goal

The odds in a life soccer match are variables which are continuously changing throughout the match and due to different situations within the match.

The table shows that a team which was in the first four teams had a difference of only 3 %. This means that the odds that were given to it to win, after it scored the first goal, were 72 % possibility of victory. It turned out that it won in 75 % of the matches.

As the best and worst teams are always the easiest to predict, the smallest amount of variations is always within them.

If we are seeing this from a bettor’s point of view, it is the most advantageous to bet on a team between the 5th and 8th place, and which lost after they scored the first goal. This is so because the odds implied a probability of 5.9 % higher than the amount of times it actually happened.

However, this only happened six times last season and thus it is always very difficult to predict when it will happen. Namely, four of the six times were played away and the two home defeats (for Southampton) were against Manchester United and Chelsea and taken altogether, all these results were expected.

What more to have in mind?

The most important factors to consider, besides the statistics above, before placing a bet in live soccer betting, based on a first goal, are numerous and they include: whether the side which scored the first plays at home or away, when was the goal scored and how far is the season, because the later in the season, the more risks are taken by the trailing teams. However, relying only on the statistics is not the most reliable option for bettors.

However, as with everything, there are always exceptions and the exceptions cannot be predicted. The odds for the home team when it first scored a goal, in the matches between Arsenal and Sawnsea and Tottenham and Newcastle, were 90 % chance of winning. However, a turnover happened, and the other side won in both of the cases.

All the information listed above are only one way to help you as a bettor place a valuable bet and they should be always compared to the odds that are offered immediately after the first goal has been scored.