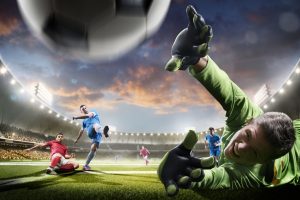 How to make a live soccer betting strategy

How can bettors know where to look for reliable opportunities which may have big returns within soccer matches in progress?

Bettors have to always take advantage of market inefficiencies. This means that they should always calculate when the odds do not reflect the true probability. When it comes to live betting, bettors should try and discover those specific areas and exploit these inefficiencies.

The notion very often used by commentators ‘it only takes a second to score a goal’ is pretty accurate. Because of the great number of potential goals during a soccer match, the life of a live soccer bettor is quite interesting.

Quite the opposite, the number of scored goals from these opportunities is relatively small. According to statistics, goals never come in series and this makes them random also. Therefore, we can never expect one goal to be the trigger for a next one. The job that live bettors need to do is to predict something which is both rare and even more random.

Complex statistical models are used by professional bettors and bookmakers. These try to predict goal distribution. However, as football is played by living beings, and not robots, and humans as they are, show various tendencies. The bettor must be able to understand and quantify the impact of those and to recognise when the outcomes that are estimated are not in line with their impact. The data for the Premier League season of 2011/12, over six intervals of 15 minutes, will be analyzed in terms of goal distribution. 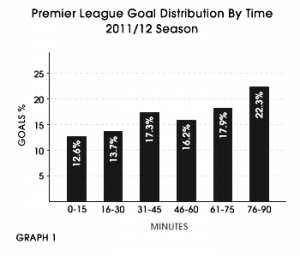 When scoring of goals is more likely to occur?

According to Graph 1, goals are more likely to occur as the match progresses and in the period that leas to half time, there is a slight increase. In the final, sixth, interval, the chances of scoring a goal are the highest and almost double that of the first interval. 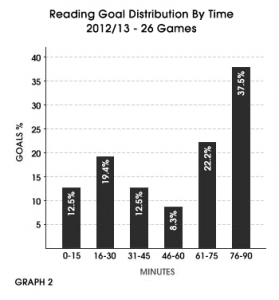 The information above may affect the live bettor in two completely opposite ways. On the one hand, if a bettor watched Reading play all the time, he may be forced to over-estimate the number of times a team scores near the end of the match. If a bettor has not watched Reading play at all, they may make wrong estimation of how Reading will perform near the end of the game, if they want to place a bet on Reading.

Later in the season Reading may start regressing to the mean values of the other teams, but there is still an opportunity to exploit and see what is nehind it, whether it is only a minor deviation from the average or something more significant.

Intensity of the game

Bettors can access a lot of available data while the game is on, such as 5 possession, shots (on and off target) and corners, which may held define the game intensity. Therefore, they are able to make good assessment of who is leading. However, as they are freely available to everyone, these data should always be used in combination with subjective analysis. A professional bettors should be able to sense where certain odds are over-valuing one team which is playing at an unsustainable pace.

In the Copa del Rey semi-final between Real Madrid and Barcelona on January 30th at the Bernabeu, in the El Clasico meeting of 2013, Real was superior over Barca in the first half. However, the pace that Real adopted was simply unsustainable. It would have been a huge mistake to bet on Real and to predict the final outcome in the first 45 minutes of the match.

Champions League 2012 final between Bayern Munich and Chelsea is another example. It also gave misleading stats based purely on possession and interaction. Bayern were superior on one hand, but the other important element was Chelsea’s tactical intention to call for pressure and try to land a lucky counter-punch. They made a game plan, followed it, and won on penalties. If bettors were only following the statistics of the game would have never placed a bet on Chelsea to win the trophy.

As seen from everything above, what bettors should always keep in mind is that the intensity of a game is something that is never a constant. The balance of possession can be altered by things like crowd intensity, adrenalin and situational factors, such as:

Under the above mentioned circumstances, the best thing a bettor could do is to see the game as two separate halves. Even the relatively simple concepts for live soccer betting should encourage bettors to upgrade their knowledge further in order to become more informed in the future.