What to make of possessions in soccer and what statistics say about them?

What to make of possessions in soccer and what statistics say about them? 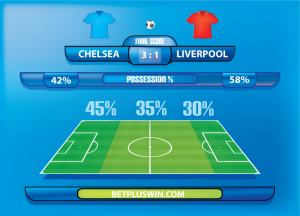 The manager of at the time, Brendan Rogers, often repeated the following: if you can dominate the game with the ball, you have a 79 % chance of winning. This is taken as a support of the possession based football.

But, if we look at the recent competitions from a statistical view point, we can see that the numbers we get for the short passing, possession oriented approach are mixed and not always in its favour.

In 2014 World Cup, Spain bowed out oat the group stage although they had over 60 % of the possession in defeats, first to Netherlands and then to Chile. At the Euro 2012, they succeeded due to their semi-final penalty shootout against Portugal, where Portugal only had a minority share of possession throughout the tournament.

In 2008/09 and 2010/11 Barcelona managed to be first in Europe with tournament possession figures in the mid to high 60% and pass numbers averaging around 700 per game. But sandwiched in between were wins for Inter Milan, 45% overall possession in the competition, barely a third in the final and just 400 passes per game in 2009/10, followed by Chelsea’s 47% overall possession in 2011/12.

In situations involving head-to-head meetings, more often the side that avoids possession is the winner. For example, Chelsea’s aggregate win over Barcelona in 2011/12, where Chelsea gained just 20 % of the ball and in the case of Real Madrid’s 5-0 aggregate trouncing of Bayern Munchen at the UCL semi-final stage in 2014, where they had less than 30 % overall possession.

All of the above seems to be very contradictive to the assumptions made by Rogers that the most chances of winning a side has is if they keep the ball for longer than the opponent team.

When possession stats are combined with other key stats

Possession is a useful indicator if used in combination with other more fundamental primary stats because raw possession is a secondary statistic and is only a constituent of the primary ones.

If they are good at tackles or interceptions, teams get possession and the only way to keep it is if they pass well. Furthermore, possession is then used to create good chances and when these chances are well converted, a goal is scored. If more goals are scored in this way than the other side, then a game is won.

Therefore, as we can see from this interdependence of events, possession is a strong indicator only if the side knows how to make the best use of it and how to create the best passes and chances to score a goal. But, on its own, a possession is not a good indicator of how strong one side is.

What are the shortcomings of Possession?

The tiki taka style of play is characterized by short passing and movement of the ball quickly from one player to the next, short passes and maintaining possession of the ball for the most of the game.

So, while Barcelona was playing in a tiki taka style to create chances for its players, Swansea did have a moderate amount of possession. They stayed firmly in their own half of the pitch, doing backward passes in a defensive tactic to prevent the opponent from scoring.

That same season 2011/12 in which Swansea created 472 chances with the third best possession stats in EPL, Barcelona created 626 chances while being at the top of La Liga’s possession charts. The four sides surrounding Swansea in the EPL possession chart had similar level of ball retention and created an average of 681 chances throughout the season, which is almost 50 % higher. Swansea finished a worthy 11th.

Swansea was a recently promoted team and thus they decided to more use possession to defend themselves, rather than to attack. They did this in order to protect a game start point and this was in the same fashion as when more successful teams use possession to protect their lead.

When faced with more superior teams, teams managed by Jose Mourinho have always chosen to adopt defensive solidity by sacrificing the ball, in roder to score from counter attacks or set plays.

Mourinho believes that the team who possesses the ball is often more likely to make mistakes and sometimes, a game can be won by an opponent’s mistake. But, at the same time, he is trying to keep the game in a stalemate.

Chelsea under Mourinho in 2014 used this tactic of possession, at Anfield, where they had just 27 % of possession, but anyway won over Liverpool with 2-0. The goals were scored following Gerard mistake and a swift counter attack.

The likely possession stats for the game between Liverpool and Chelsea were determined even before the game and therefore, the bettors should have already anticipated them.

Pragmatism according to Pulis

Sometimes, the best chance for one side to get a good result is to play ‘without’ the ball. This is often negatively perceived by the public, but it is a good way for the team to reach what they aim for.

An extremely defensive play at home and away, together with long balls into the half of the opponents and followed by brief pressing attacks, was a pragmatic approach by Stoke City under Tony Pulis. Stoke City were technically inferior against many of their Premier League opponents. In all of their 56 victories under Pulis, they had less than 50 % of the possession.

As said before, possession on its own has a very low impact on the overall game. However, possession combined with other primary events that happened during the game, such as how many chances did a side create or concede and how quality these chances were is what matters for the outcome of the game. Therefore, drawing up conclusions based only of possession statistics should be avoided and they should only be taken into consideration together with the primary events, in a more complex analysis of gathering primary statistics and correlating them to goals.

How to effectively measure the team’s ability?

In order to measure the real team’s ability we have to take into consideration their efficiency into using their possession to create chances and how they can prevent their opponent from using the ball when they have it. Even if a side uses the ball to create chances, not always these chances are of good quality and often the shots are made from a bad location. Also, sometimes a team may have higher levels of defensive pressure.

Using shot location data, we can see that chances to score a goal are greater on the counter attack than in similar open play shots which are often slow and this gives the opponents more time to organise themselves. For example, when Chelsea scored a counter attack goal at Anfield and when Ronaldo stroke on the break for Real Madrid in the UCL second leg in Munich, in both of these cases, the ball was shot at an exposed goalkeeper.

The above two examples are not always typical for all such chances, but it is always better to draw conclusions from events like shots, when put into their proper context, than to do it solely from dominant possession.

An example of this is Atletico Madrid, the champion of 2014, which scored third of the goals from set pieces and counters and had 49 % of possessions. In the UEFA Champions League, this figure fell to 45 %, where over half of their goals were scored from counter attacks of set pieces. They won over their city rival Real Madrid in the final.

Taking everything into account, possession statistics say only about how a team technically chose or was forced to play the match. But, they never tell the real truth of how good a team is, although possession based teams may, of course, be good ones. However, bettors should always use these figures in combination with the primary indicators, because as stated before, possession stats are only a secondary component part of the primary indicators.