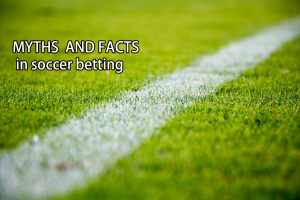 In soccer betting, not every received knowledge can be taken for granted. In fact, much of the knowledge a bettor receives may be considered as unreliable and should be treated with caution. However, some common beliefs that are held among soccer bettors are so much considered to be true, that everyone accepts them as such. Below are several common myths that have been debunked.

Setting the odds in soccer betting is crucial for great profit. Bookmakers set the odds according to two criteria: what they consider as a likely outcome and how much money the bettors are putting on the markets.

So, the question that may arise is: when do profit opportunities arise? The answer to this question is: when bettors ignore statistics and place bets only on the basis on commonly held misconceptions.

Some of the most common sayings is that if a club had a match in the Champions League before, they would be certainly tired. However, placing a bet against them is not a reliable option. The reason why lies in the fact that even if the match was played away and not at home, any European city is a maximum of three hours away and the time spend traveling does not mean greater physical exhaustion for the players. If we add the most advanced training facilities and the personnel which provide the best fitness and wellbeing services to the players, there is no reason for us to believe that players will not be fit for the next game.

Rate of winning after UCL games

Below is data how three top Premier League teams performed after European games in the period of the past six years. The study was conducted by BBC.

Arsenal has improved their performance in the League after a European fixture in three seasons and deteriorated in the rest three. But, the difference was small.

On the other hand, Chelsea has been constantly underperforming after European Matches in the final two seasons, while Mourinho was the manager.

After 2011/2012, Manchester City has not made any significant progress in the Champions League.

The necessity to win

# Myths and facts in soccer betting

The belief that a team needs to win a match, if they want to be part of the next year’s UEFA tournament, is again one of the myths that more often than not proves to be unreliable and a dangerous territory.

Kevin Pullein, the author of the book The Definitive Guide to betting on Sport (2004), treats this matter on whether a team improves its performance just because it ‘needs to win’.

There are two presumptions regarding this matter. The first one is that a team which must win, will give its best efforts to do so. But, on the contrary, this means that it was not giving it’s best earlier, which of course may not be always the case.

The second presumption is the belief that because of the pressure to win, players will perform better, which is hardly the case because pressure on players usually worsens the performance.

Pullein came to the findings that after 10 seasons of the English Championship and League One, those teams which are trying to promote performed worse in May, than in any other month of the year.

How to bet in the end of the season?

Bookmakers make profit when bettors ignore statistics. They are aware of the common myths bettors believe in and use this opportunity to price up teams who desperately need to win in order to mislead bettors to put great deal of money on a certain bet.

Thus, bettors should always keep in mind that out of all the teams which were studied in the BBC analysis, 60 % did the same or even better after European games.

Therefore, knowing this, they should always avoid clichés which very rarely have any statistical basis and place their bets on post-European matches differently.