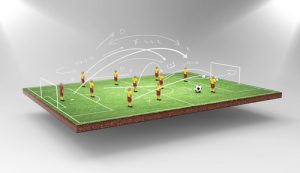 The concept behind the Poisson Distribution is purely mathematics and it turns the mean averages into a probability. If we use this method to calculate the probability of Manchester City scoring a goal, when their average is 1.7 goals per game, we will get that City will score 0 goals 18.3 % of the time, 1 goal 31 % of the time, 2 goals 26.4 % of the time and 3 goals 15 % of the time.

How to calculate the score-line probabilities using the Poisson Distribution

After we are done calculating the “Attack Strength” and “Defence Strength” for each team and after comparing them by calculating the average number of goals that are likely to be scored by each team during that game, we can calculate the score-line that we are most likely to get in a match.

In order to calculate the Attack Strength and Defence Strength, a representative data range is crucial. If the data range is too long, then it will be useless because it will not represent the current strength of the team. Too short data range on the other hand will skew the data. Ideally, the Poisson Distribution will make the best use of the data of the 38 games played by each team in the 2015/16 EPL season.

We need to determine the average number of goals scored per team, per home game and per away game, using the last season’s results, and by this we can start calculating the Attack Strength.

Therefore: total number of goals scored last season divided by the number of games played, as shown below:

Therefore, “Attack Strength” is the ratio of a team’s average and the league average.

The Defence Strength is the ration of a team’s average and the league average.

Attack Strength and Defence Strength of Tottenham Hotspur and Everton

In order to calculate the likely number of goals Tottenham might score, we can use the formula as follows:

Tottenham’s Attack Strength is multiplied by Everton’s Defence Strength and the average number of home goals in the Premier League.

The likely number of goals Everton might score is done in the following way:

Everton’s Attack Strength multiplied by Tottenham’s Defence Strength and the average number of goals in the Premier League:

A 100 % of probability is distributed across a range of goal outcomes for each side by using this mathematical formula created by the French mathematician Simeon Denis Poisson.

There is an easier way to calculate by using a Poisson Distribution Calculator.

All we need to do is enter the different event occurrences – in our case goals outcomes from 0-5 – and the expected occurrences which are the likelihood of each team scoring – in our example Tottenham at 1.623 is their average rate of success, and Everton 0.824; the calculator will output the probability of the score for the given outcome.

The above mentioned Poisson Distribution method is a way to calculate score-line probabilities. In this manner, a bettor can use it to compare his measures to a bookmaker’s odds and thus, take advantage of the discrepancies. This can be also further strengthened by his own assessment of situational factors, such as injuries, weather, etc.

How to convert estimated chance into odds

The number of draw possibilities is infinite, but the chances of a draw above 5-5 are so small and therefore we can safely not take them into consideration for this model.

What are the disadvantages of Poisson Distribution

Situational factors, such as club circumstances, game status etc. and the change of each team during the transfer window are factors which are completely ignored in the Poisson Distribution method. Therefore, the new Everton’s manager, Ronald Koeman, was not taken into consideration and thus this method failed to measure the extent to which he might have influenced the team. Furthermore, as Europa League fixture was close, it also did not consider that Tottenham players might be fatigued. Other factors which are ignored when using this method are the pitch effect where certain matches tend to be either high or low scoring.

What is also important to mention is that the odds that are given with this method do not factor in the margin a bookmaker charges and they are especially important because they are used to find the value of the bet.